At the end of 2021, I’d spent a few years living seasonally in my Toyota RAV4. I was happy with it. I drove it on terrain far beyond the abilities of a compact crossover, and somehow it always made it through. It was the perfect adventure machine, and I fully intended to run it to the ground.

The only problem was my intention to live this lifestyle full-time. I wanted more space for long-term living, and for my outdoor equipment. The Toyota RAV4 was a perfect “tent-on-wheels,” but now I needed a “home-on-wheels.” Already having vehicle-dwelled for a while, I knew what my priorities were — reliability, off-road ability, storage space, and simplicity. 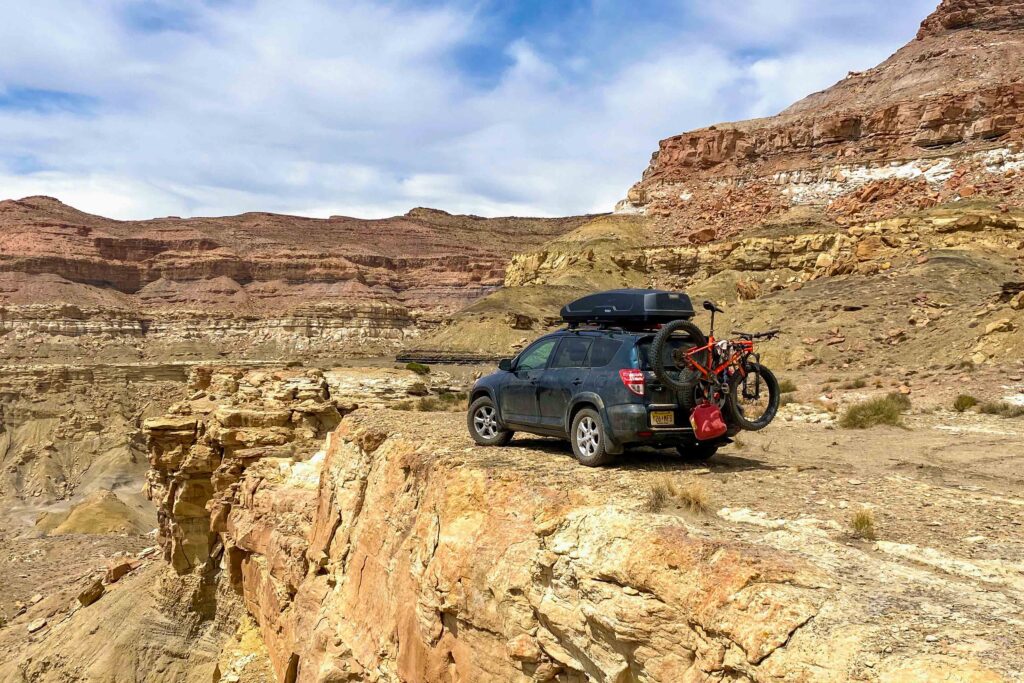 I settled on a Toyota Tundra with a lightweight camper in the back. I considered a van, but they fell short on the reliability and off-road front. I’d also come to learn that stealth doesn’t matter as much as everyone thinks it does.

I looked into commercial truck campers for a while. Being a senior in college, they were past what I could afford, even with financing. Furthermore, most were inadequate for off-road abuse and cold temperatures. None of them had enough storage space for my needs too. Instead, they would opt for useless features like showers, toilets, water tanks and gigantic sitting areas. All these contraptions are another item to break; and render a camper bloated, heavy and cumbersome.

I realized I would need something custom to meet my needs. I drew back to vans, as that’s their main advantage — a blank canvas to build in any way. I ended up finding the perfect solution for a truck however. There’s a company in Quebec, Canada that makes a product called the “Spacekap Diablo,” an empty fiberglass truck bed shell. They describe it as a “van body for the back of a pickup truck.” Their primary customers are tradesmen in Canada who use it as an alternative to a cargo van. It’s the empty shell of a van, which I could place on the back of a Toyota Tundra: The perfect mutation of a van build and truck camper on the most capable chassis possible. It was perfect.

I wanted to complete the build soon. Then, I could move into it and stop spending most of my income on an apartment I barely used. A few days of searching later I bought a rusty but functional 2010 Toyota Tundra with 200k miles on it, for $12,500. Right after buying the truck, I placed an order for a Spacekap Diablo with a roof rack. Shipped and installed, that was about $11,000.

While waiting a month for the camper to arrive, I started to plan. I decided on the components and layout of the build without ever seeing the camper, and stockpiled every single part ahead of time. Once the camper arrived, all I would need to do was build.

At the beginning of December 2021, it arrived. I constructed the build in the Boston Home Depot parking lot, much to the amusement of the employees. To make matters more interesting, I had university classes and a job, which meant I was busy during the day. Because of that, I had to build in the freezing cold and darkness of Boston in December. I spent many nights in that parking lot working until 3 a.m. with drug addicts shooting up in the corners of the plaza. I even witnessed the occasional fight. Par for the course given the Home Depot’s proximity to Boston’s infamous “Methadone Mile.” I was never once bothered though. I suppose they figured the guy chopping lumber in the cold past midnight in a desolate parking lot was too crazy to deal with.

I completed the build a mere two-and-a-half weeks later. A lot of late nights and prior planning led to that short construction time. I took the truck out West for some of its first adventures, on what would be my fourth cross-country trip. Of course, the building is never done. I needed to perform several repairs in temperatures that made Boston in December feel like a sunny day at the beach — but that’s a story for another day.

$32,500 is less than the cost of most new trucks and most new campers. This covers both truck and a new camper. I sold my prior vehicle as well, which helped cover the cost. With the rest of it financed over 6 years, it’s much cheaper than rent.

This build is a perfect blend of value, reliability, off-road ability and storage space. It would be a great choice for many more people too. For comparison, a used van and conversion for the same price won’t match the capability of a Toyota Tundra. A 4×4 van would cost more, even used. A used commercial truck camper would suffer from functionality, durability and weight. The few commercial campers which are light enough for a Tundra would cost a premium in the used market too. Finally, if this truck ever dies, I can move the camper to another vehicle rather than rebuild everything.

This could be even cheaper if you found a used Spacekap diablo, constructed a more minimal build, or bought a cheaper truck. 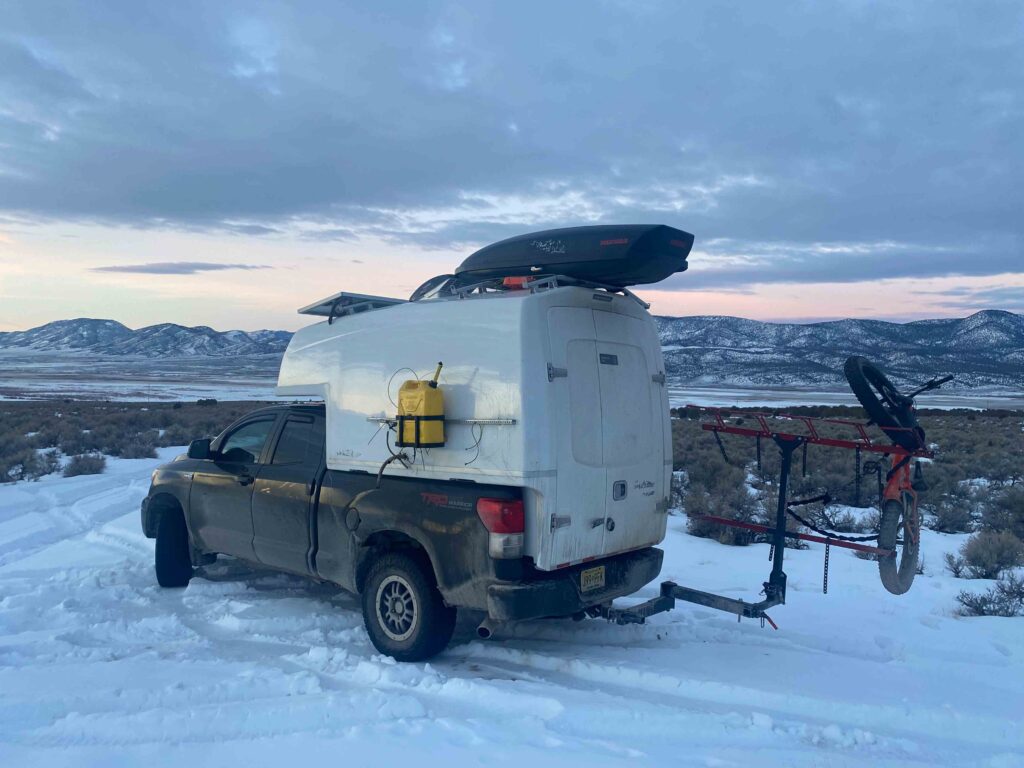 The truck is a 2010 Toyota Tundra 4WD TRD Rock Warrior Edition which had 196k miles when I purchased it for $12,500. The prior owner had replaced most of the wear-parts in the suspension and under the hood. It also had a decade of maintenance records. The only problem was the rust of 11 New England winters. This was the best option in the area though, and I bought it the same day I saw the Craigslist listing.

As soon as I purchased it, I heard the tell-tale hum of worn wheel bearings when I hit the highway. I replaced these myself in the parking lot of my apartment, which unfortunately became a two-day affair thanks to the sheer amount of rust. 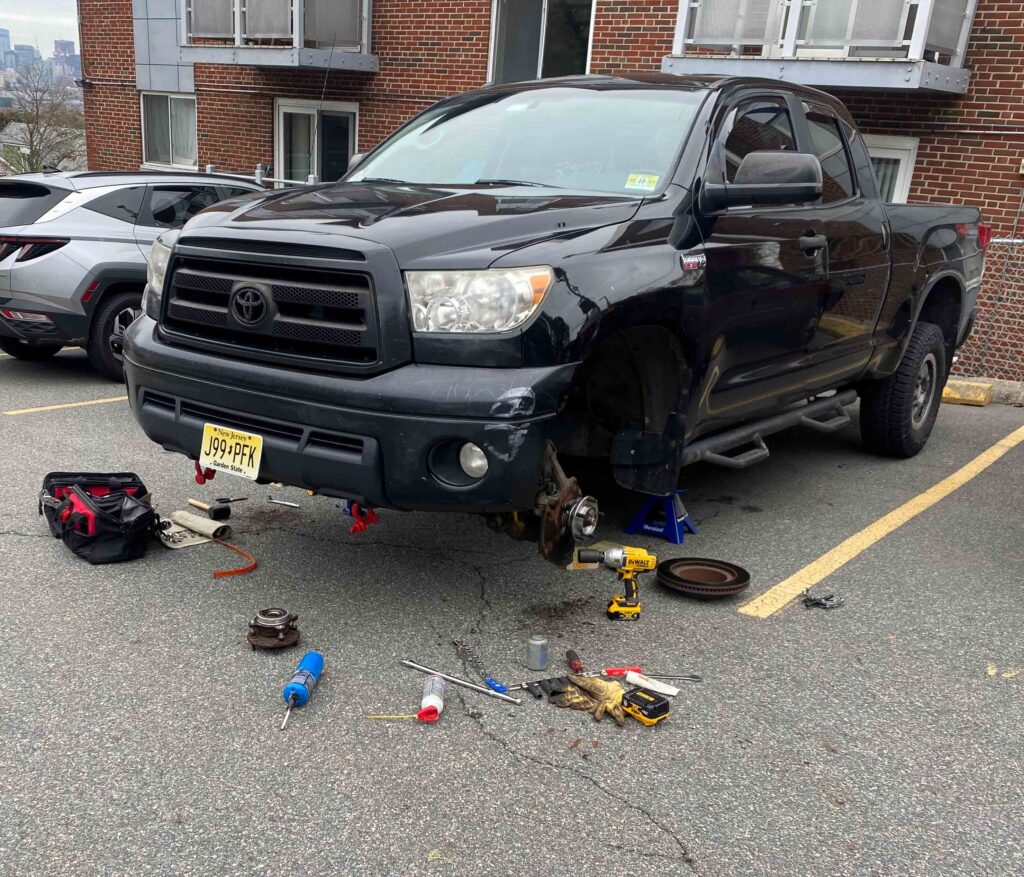 When I removed the plastic bed liner, I discovered rust threatening the integrity of the bed. This was a problem given I’d have a camper on it full-time. The cost of replacing the entire truck bed was out of the question. So, I managed to perform a surprisingly-decent repair with sheet metal, self-tapping screws, Bondo, POR-15 rust-sealer paint and a new coat of bed liner.

Aside from those repairs, I had to replace the tires. I chose 33″ Falken Wildpeak AT3W All-Terrain tires. I used the same on my previous vehicle. They have snow performance close to snow tires, and great traction on dirt, sand, gravel and rock. I also installed a VelociRax 5X hitch-mount bike rack on a RakAttach hitch swing-arm. Not only can I fit five bikes, but I’ve also lashed other bulky outdoor equipment to the rack. Finally, I installed SumoSpring helper springs to deal with the weight of the camper. 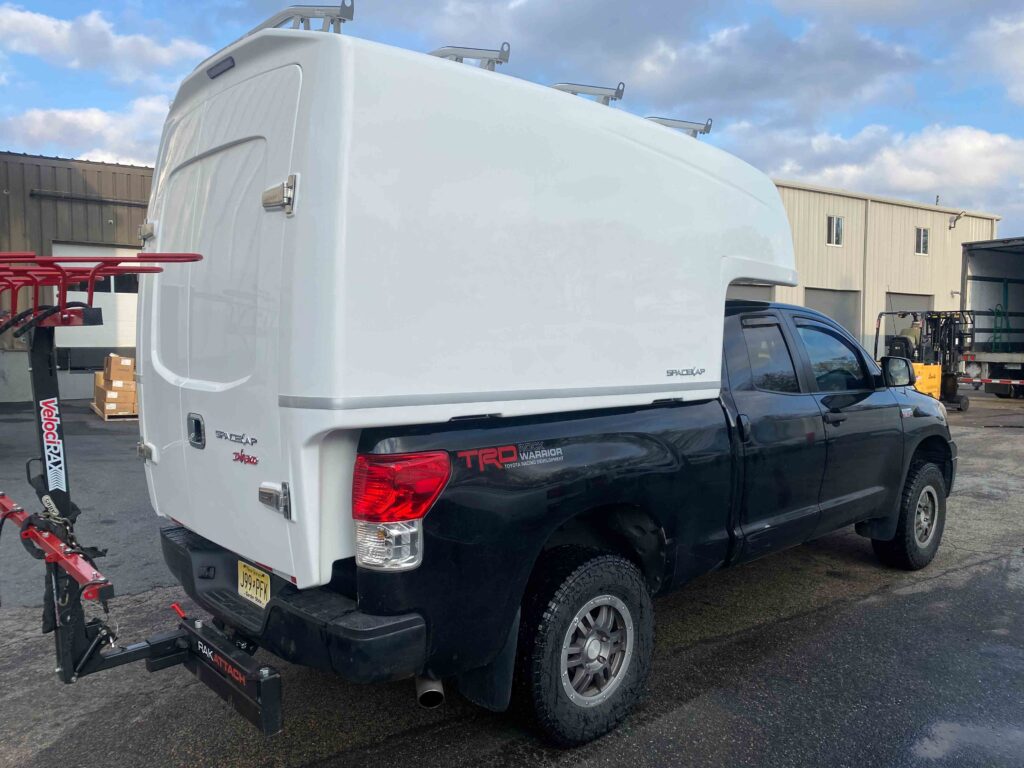 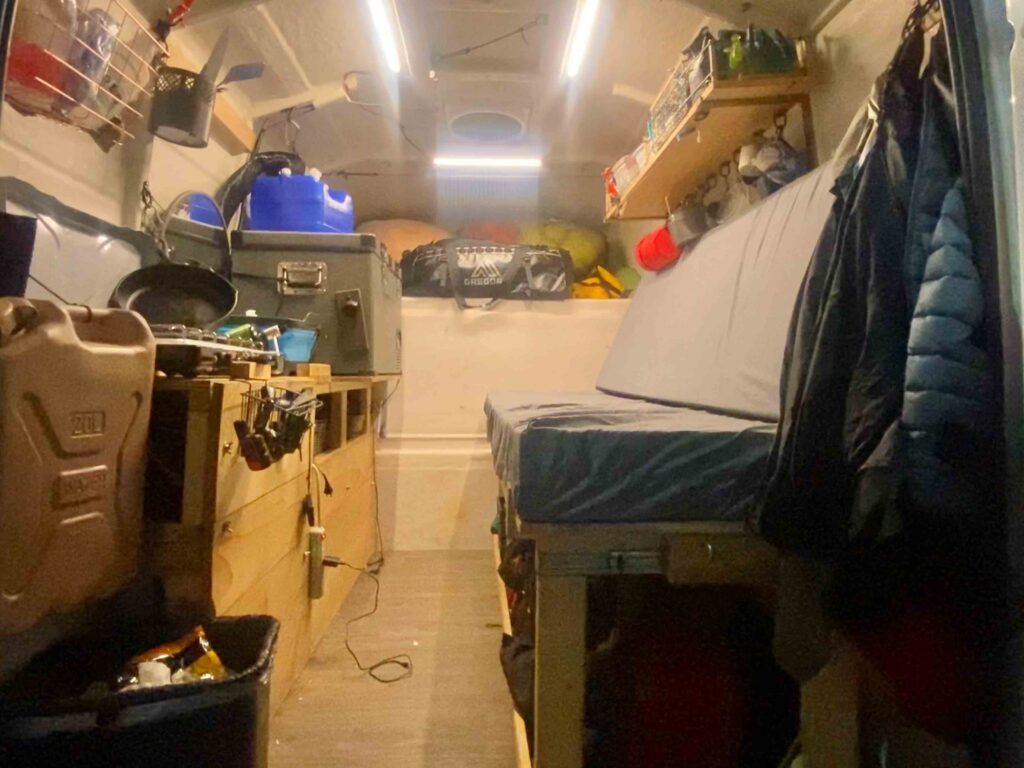 I approached the build like a campervan conversion. I used 3/4-inch plywood and two-by-fours as the building materials of choice. I began by installing the floor: 3/4-inch plywood with a vinyl sheet on top. Then, I built a shelf system/countertop on the left side of the camper. That would house the electrical system, stove, sink, cooking supplies and fridge/freezer. This was more difficult than I expected. There are no straight lines on the walls, and the shell tapers throughout its length. I must have purchased three times as much wood as I used until I got the measurements right. 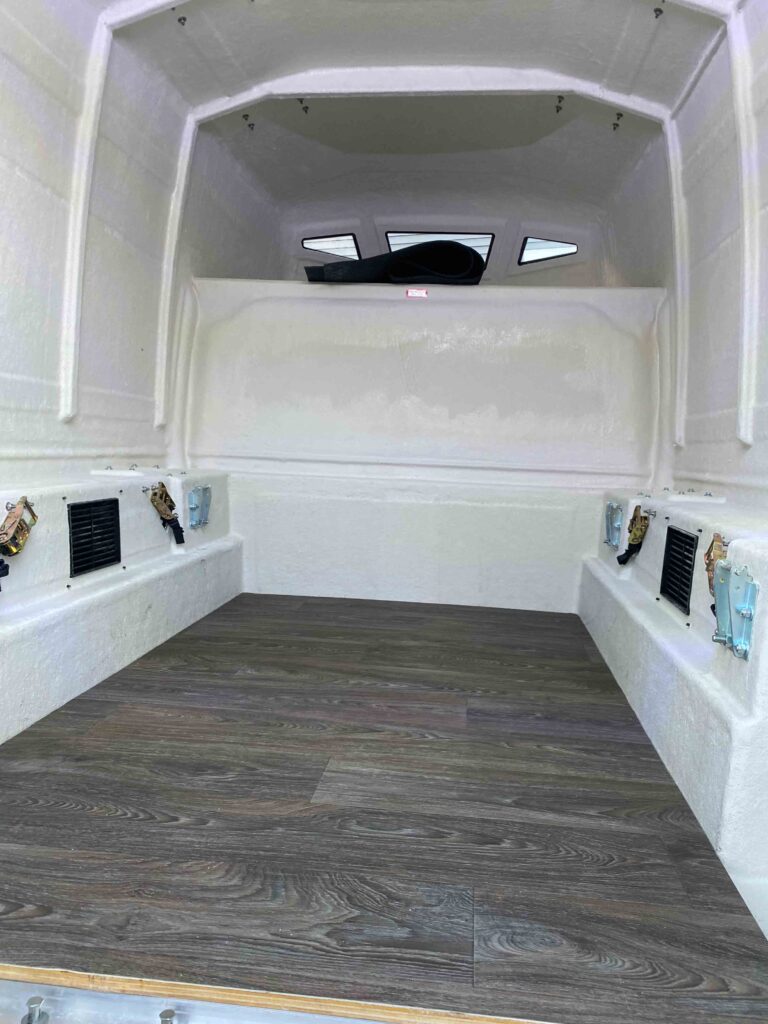 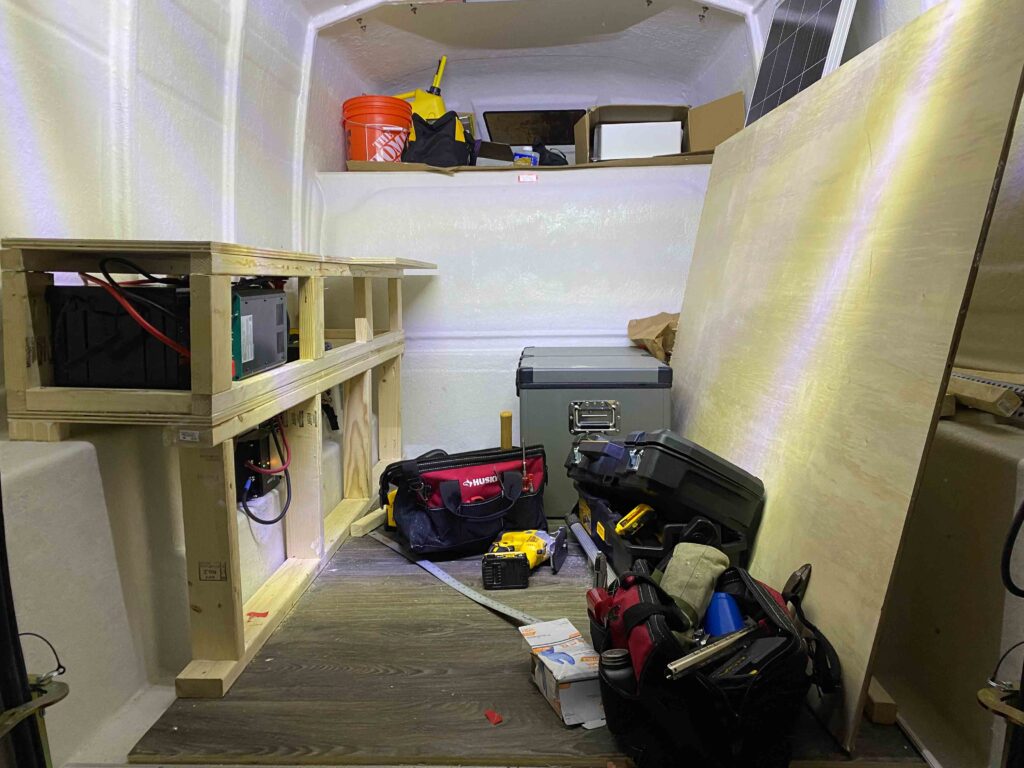 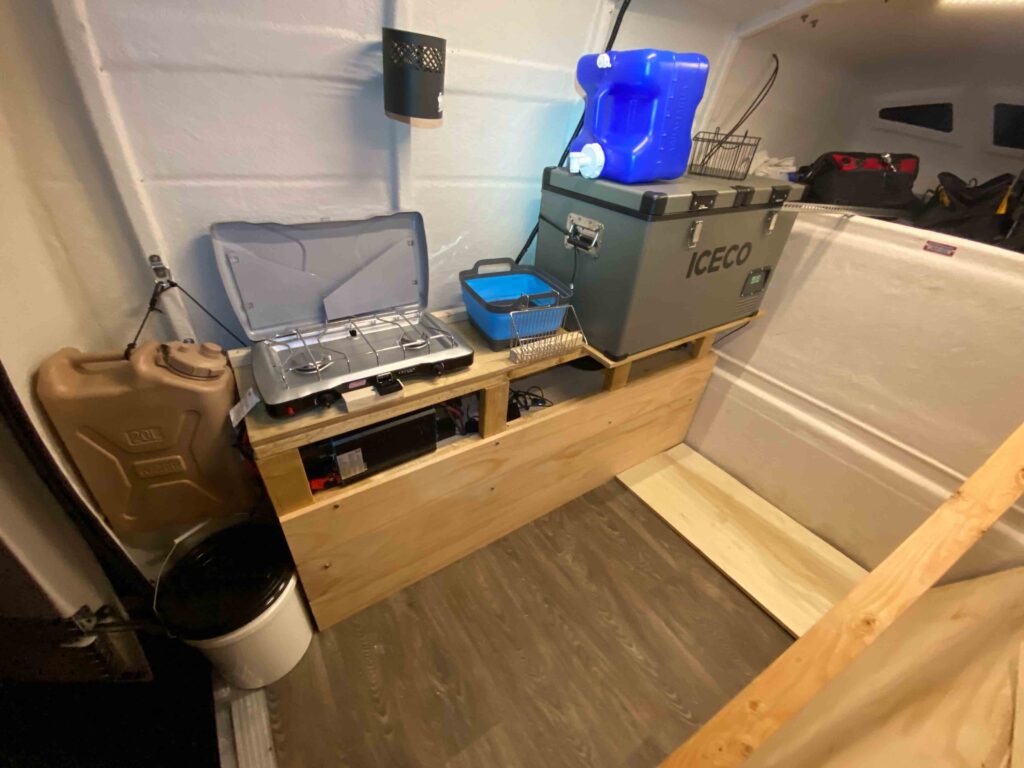 For the electrical system, I used a Renogy 200-amp-hour LiFePO4 battery with a 1,000-watt inverter. A 200-watt solar panel with a hybrid solar charge controller and battery isolator powers the system. It lets me charge off the truck’s alternator too, removing the need to always have enough sunlight.

On the right side of the camper, I built an elevated sofa bed that runs the length of the interior. The structure is mounted on heavy-duty drawer slides, and the back of the sofa is built on a piano hinge. When extended, it flattens into a 48-inch-wide bed. There’s plenty of empty space underneath it which I use to store boots, snowboards, and other gear.

I also made judicious use of elevated storage. All my food, water bottles and mugs are on a shelf; other supplies are placed in baskets screwed to the walls. These design decisions freed up the entire cab-over area. In truck campers, that’s always the location of the sleeping area. By putting the sleeping area into the truck bed, I had the entire cab-over space to use as a storage loft. I use that loft to store clothes and outdoor equipment. Then, to quite literally “top it all off,” I installed a Yakima Skybox 16 on the roof for even more storage. This allows me to carry all my gear with me, all the time. 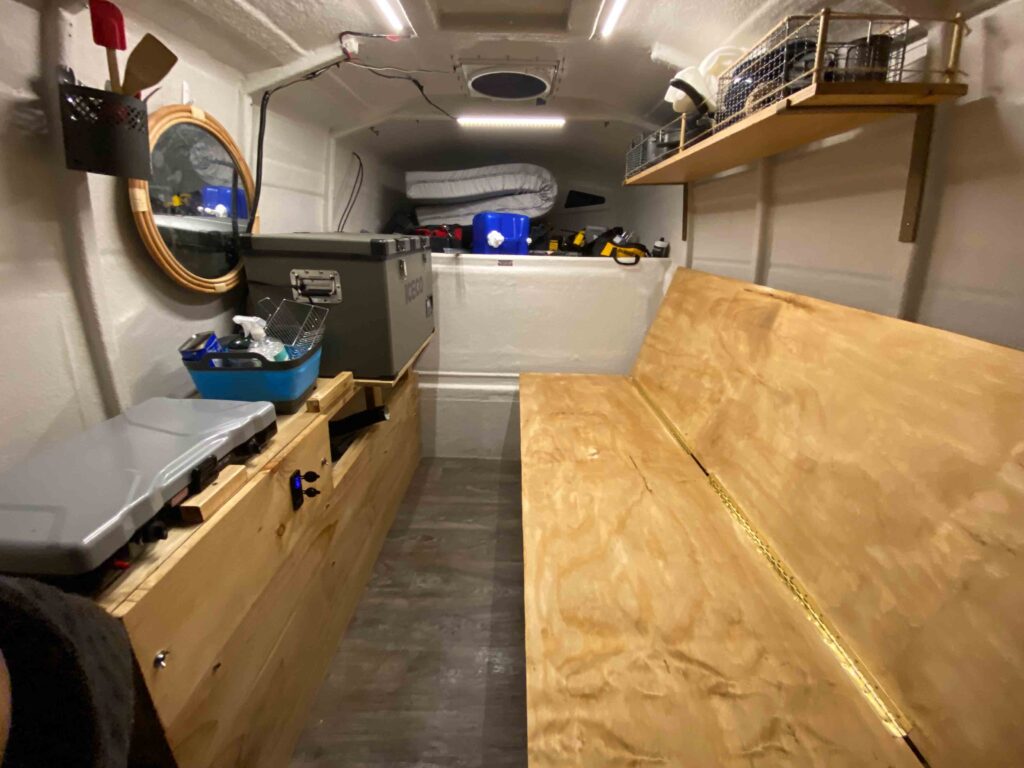 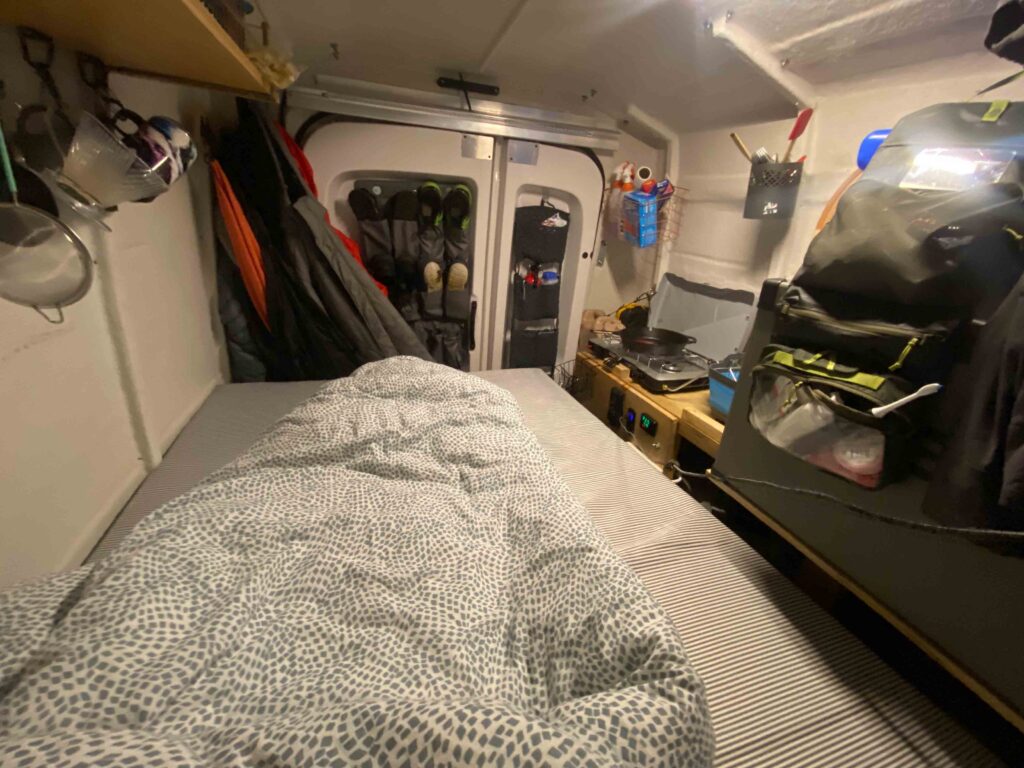 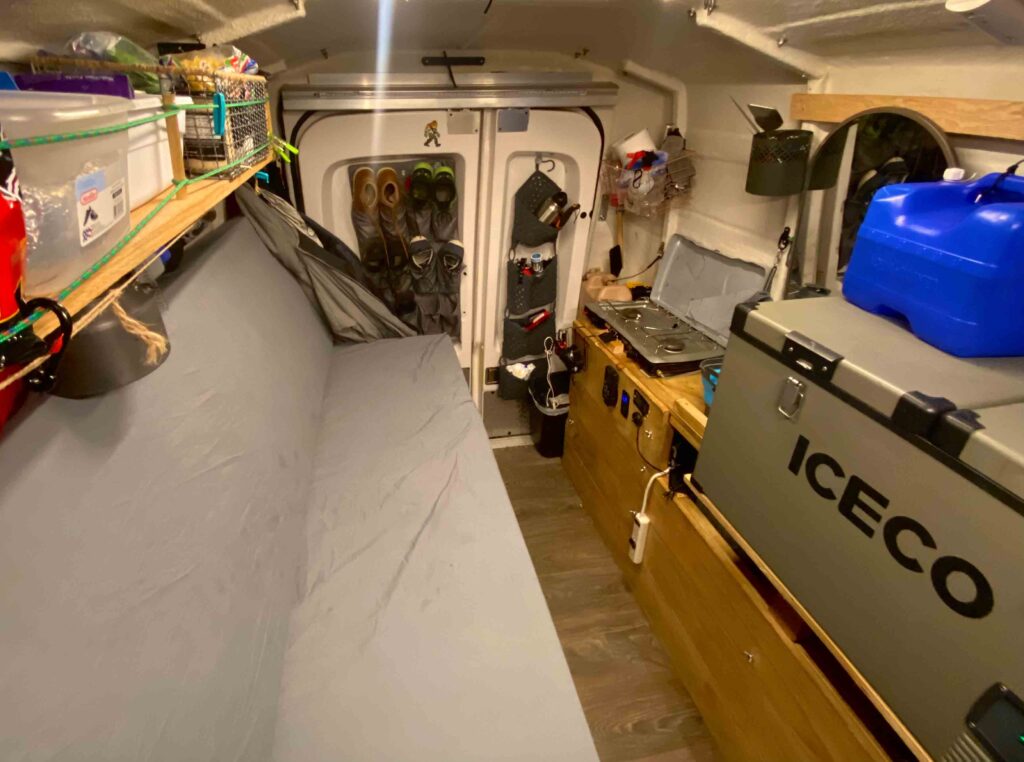 For my fridge and freezer, I use an IceCo VL60. It’s energy-efficient and allows me the priceless luxury of access to ice cream wherever I may be. For ventilation, I use a MaxxAir 7500k MaxxFan Deluxe roof vent. The most important appliance would be a heater, I needed to stay warm in cold places after all. I started with one heater, a simple 2-kilowatt Chinese diesel heater mounted to the wall, plumbed to an external diesel tank. After spending two nights in Leadville, Colo. at 10,000 feet above sea level, that heater quickly failed. I replaced it with a used Webasto. Anticipating future heater failures, I added on another Chinese diesel and a kerosene lantern. With one heater, I can keep the uninsulated interior at 70 F while it’s 25 F outside. With all three, I am set for any temperature.

For cooking and plumbing, I wanted something minimalist and modular. Any plumbing would become destroyed by extended periods of freezing temperatures. So, I selected a gravity-fed water system by way of a five-gallon Scepter water can and a four-gallon Reliance Aqua-Tainer. The sink is a collapsible camping model, which I put on top of a 1-gallon water jug I use as my pseudo-gray-water tank. I cook on a Coleman Triton camp stove that has two burners and uses one-pound propane tanks. It’s a crude system for sure, but it’s simple, replaceable, and has nothing that could fail. 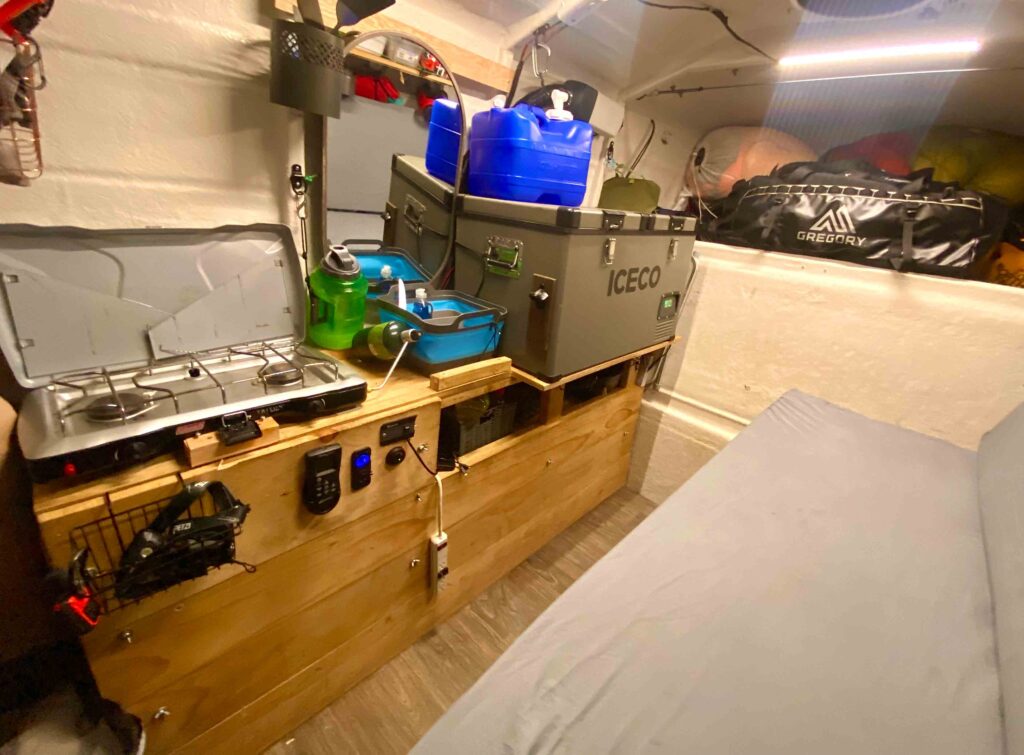